All eyes on Team Nigeria as Tokyo Olympics begin 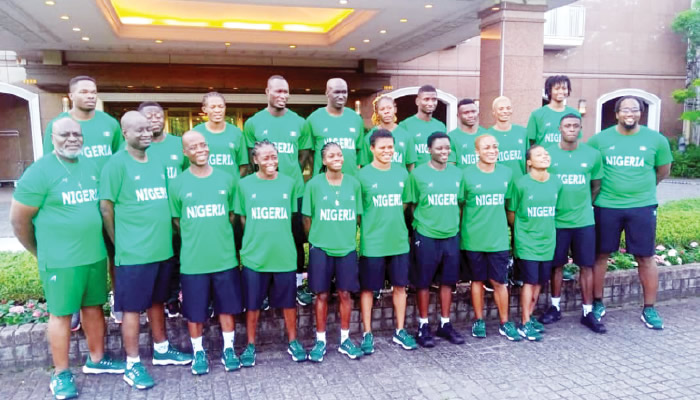 After a year’s delay, the 2020 Olympic Games kicks off in Tokyo, Japan. ’TOSIN OLUWALOWO and TONI UFOH write on the expectations at the Summer Games and Team Nigeria’s chances at the global showpiece

THE opening ceremony of the Tokyo 2020 Olympic Games, which kicks off today comes as cheering news for the sports faithful after the Games, which were initially set to hold between July 24 to August 9, 2020, were postponed due to the outbreak of COVID-19 globally.

Nigeria – competing in its 17th Olympics – has a total of 60 athletes taking part in 10 sports.

The Olympics has brought mixed fortunes for Nigeria, with 1996 still Nigeria’s best outing where Chioma Ajunwa and the country’s men U-23 football team won gold medals.

Nigeria’s other gold medal at the Olympics came in 2000, when the men’s 4x400m relay team had their silver medal upgraded to gold medal after a member of the American team, who had won the gold medal, failed a dope test.

Africa’s most populous nations’ hopes for medals during the Tokyo Games are limited with only a few of the competitors at par with the best in their events.

Long jumper Ese Brume and wrestler Odunayo Adekuoroye are Nigeria’s biggest medal prospects at the Games, with both women in excellent form going into the Olympics.

Brume, a bronze medalist at the 2019 World Championships, leapt 7.17m in May to set the World Lead and break Ajunwa’s Olympics gold-winning African long jump record.

She is hoping to continue in that form in Tokyo.

“Hopefully by the grace of God, I can win the gold medal. But the major thing I am praying for is to climb the podium and I am also praying to surpass my PB,” Brume told The PUNCH.

Adekuoroye is also the No.1 ranked wrestler in the world in the women’s 57kg category.

“At least, most of the wrestlers I may wrestle with in the Olympics, I wrestled against them in the Poland Ranking Series. So, it’s a very good tournament for me. For like a year plus, I’ve not been to any international competition.

“So, going to the Poland Ranking Series and performing excellently well is good for me ahead of Tokyo.

“I believe it’s my time to shine. So, I will definitely bring gold to Nigeria.”

Others who have a chance of making a podium finish at the Olympics include silver medallist in the long jump event at the 2008 Olympics in Beijing, Blessing Okagbare, who will be competing in the women’s 100m, 200m and 4x100m and Tobi Amusan, who is ranked fourth in the women’s 100m hurdles.

D’Tigers’ exploits in the pre-Olympics exhibition games, where they defeated the USA and Argentina – ranked first and fourth in the world respectively – have also seen them touted as having an outside chance of making it to the podium in Tokyo. The big feat saw them ranked fourth on the Power Ranking out of the 12 teams competing at the Olympics.

Another athlete to watch is table tennis star Aruna Quadri, who became the first African to qualify for the quarter-finals of the Olympics in Rio in 2016. The 32-year-old is seeded 15th in the Games and has drawn bye to the third round.

Table tennis player Funke Oshonaike will be competing in her seventh Games in Tokyo Games, making the first African woman to achieve the feat.

On his assumption of office in 2019, Sports minister Sunday Dare embarked on a mission to ensure Nigerian athletes put up a best-ever performance at the Olympics with the Adopt-An-Athlete initiative, which has helped in helping the athletes offset the financial strains of training, attending competitions and preparing for the global sports showpiece.

The initiative is meant to increase funding for the development of sports in the country in the build-up to Tokyo, with  individuals and companies to pick an athlete or a team and sponsor them.

“The hope of the athlete is to be at the Olympics, or the World Championship for their sport, to stand on the podium, and fly their country’s flag,” Dare said during the inauguration of the project.

“They want to be the reasons why Nigeria’s flag should be hoisted and the national anthem is sung while the world watches. This is their reward, but it is also our honour and prestige, and pride among nations.  It is this hope that drives them to invest in themselves, to work hard, to endure all odds, and try to surmount every challenge. The adoption programme is our baby – all of us. By it, we hope to change the narrative about sports in Nigeria.”

While the home-based got $10,000 courtesy of the initiative, their overseas-based peers received $20,000 from individuals, firms and state governments.

Several states including Edo and Bayelsa, as well as firms like Halogen Group and SIFAX Group adopted some of the athletes on the way to Tokyo.

COVID-19 has been one of the major hindrances to Nigeria’s preparations for the Olympics.

Aside from COVID-19, some fear the crisis rocking the Athletics Federation of Nigeria may take its toll on the athletes at the Games.

While all of Gusau’s plans to hold National Trials for the Olympics could not hold, the Okowa-led AFN backed by the sports ministry finally held trials in June, where Nigeria’s representatives for the Olympics were selected.

Both factions have been at loggerheads over the athletes kits for the Olympics. While the Gusau-led body had already signed an agreement with German kits company Puma to kit the athletes at the Olympics, the Okowa-led AFN and the sports ministry went for locally made kits by AFA at the Games.

The development, however, took a different twist this week when Secretary-General of Okowa’s faction wrote to Gusua requesting him to hand over the Puma kits.

Team Nigeria captain, Aruna, says the Team Nigeria contingent are one big family and can’t wait to do the country proud.

“We are all one family and we are looking forward to giving our best for the country,” he said.

When the flame is finally lit at the Tokyo Olympics on Friday, a new era of athletes have a chance to make history in the absence of a host of established stars.