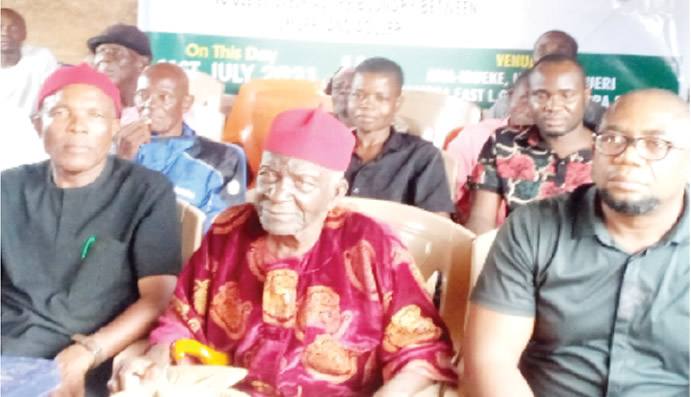 A 95-year-old man, Nnake Chibuzo, on Wednesday, led the people of Ikenga Umueri in the Anambra East Local Government Area to protest against alleged land grabbing in the community by their Aguleri neighbours.

The two communities had over time fought wars, killing scores of people and destroying property worth millions of naira over land.

The state government in January instituted a panel to find the immediate and remote causes of the lingering land feud in the area, as well as identify and demarcate the boundaries between the two communities.

On Wednesday, the nonagenarian led the Ikenga Umueri Progressive Union in a protest over what he called constant encroachment on their land by their Aguleri neighbour.

He said the state Governor, Willie Obiano, was taking side with Aguleri because of his family affiliation to them.

Also speaking, the Chairman of the union, Frank Ibegbunam, said a certain resolution by some traditional rulers for peace in the area was rejected by the town as none of its members was part of the negotiations.

He urged the boundary committee and the state government to discountenance the resolution, calling on both federal and state governments to cause the implementation of a White Paper and court judgement on the disputed area for peace to reign.

He said, “This matter has been a thorn in our flesh and torture to our brains. We had thought that the governor, who is almost eight years in office, would have addressed this matter.

“When the panel was set up, we were happy, thinking it would be fair and firm in view of the calibre of members. But we lost confidence in the process when politics came in.

“It is unfortunate we’ve not got a government that has the willpower to address this matter.”