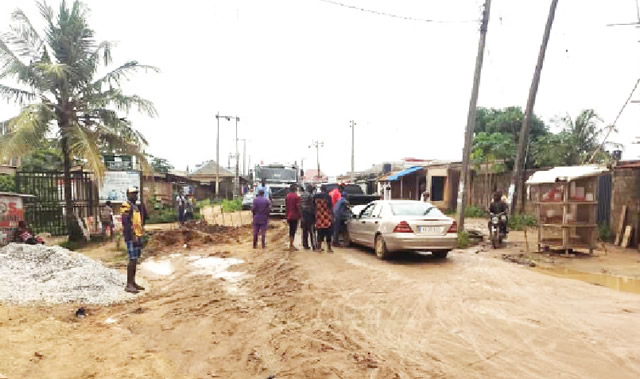 No fewer than 10 communities in Magboro, in the Obafemi-Owode Local Government Area of Ogun State, have threatened to boycott the state council poll slated for Saturday over the activities of sand dredgers in the area.

The residents stated that the dredgers damaged the only road which connected them to the Lagos-Ibadan Expressway.

The leadership of the CDAs, under the aegis of the Joint Community Development Association, said the Cele-Oke-Ayo Road, which connected all the communities, was damaged by heavy trucks of sand dredgers plying the road.

According to him, due to the presence of the companies, over 100 trucks now ply the road everyday and night, causing environmental impact and noise pollution in the area.

The community leader said the access road had always been maintained by the CDAs until the dredgers came in.

Adebanjo noted that an agreement was reached among the dredgers, the truck drivers and the communities that the maintenance of the road would be carried out under corporate social responsibility, but the companies failed to fulfil their part of the agreement.

He said, “The road is now in a deplorable condition. We cannot drive our cars anymore. A few residents, who still manage to drive, spend a lot of money to repair their vehicles which get damaged every day. Our wives and children have resorted to trekking now because commercial motorcyclists have stopped plying the road.

“We are boycotting the election to register our displeasure and notify the government about the insensitivity of the dredging companies to the plights of residents.

“The CDAs were stopped by hoodlums sent by the dredgers when we attempted to repair the road. The attack was because the repair of the road will take some time and their dredging business will be delayed. We reported the case at the Ibafo Police Station, but we were asked to let the traditional ruler settle it. We are not telling them not to do business, but they must repair the road.”

The Olu of Gaun, Oba Sunmonu Seidu, said he was making efforts to settle the matter.

He said, “Let the flag bearer of each political party bring something to appease the angry parties. Aren’t they the ones looking for votes? We have to settle it amicably. I will talk to all the concerned parties. I can’t order anyone not to vote, but let all concerned parties come first.”

A representative of the dredging companies, identified only as Fatai, did not pick his phone which rang out several times on Thursday.

He did not also reply to a message sent to his phone as of the time of filing this report.

The Ogun State Commissioner for Information, Waheed Odusile, told PUNCH Metro that the state government was not aware of the situation.

He urged the residents to write a petition to the government, assuring that the matter would be looked into.